How Bilbo Baggins Ruined Everything 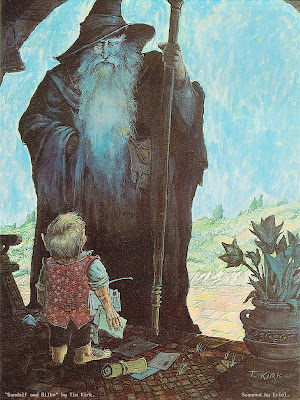 Quick poll: how many folks have played a halfling in AD&D (1st or 2nd edition)?

Okay, now how many folks have played a halfling in AD&D that was NOT either a thief or multi-class thief? I’m figuring a few hands are going down here.

Finally, how many people have refused or faced a refusal from someone when offered a chance to play B/X or BECMI D&D because “it’s stupid that halflings can’t be thieves.” I know my hand just went back up.

The main and biggest gripe I hear from those who refer to play B/X or BECMI is the whole “race as class” issue. To clarify: B/X (and BECMI which is based on B/X) offers seven “classes” of adventure, four human (fighter, thief, cleric, and magic-user) and three demi-human (dwarf, elf, and halfling). In AD&D, “class” is treated as an occupation rather than a type, and “race” (one’s species) is introduced as a separate issue…so one can be an elven fighter or a dwarven thief, for example.

But who plays an elven fighter or a dwarven thief? At least in MY old AD&D campaigns, we didn’t see any of these. Perhaps because we played higher level games, perhaps because we were all “power gamers” (I don’t think that was the case except to a minor extent) players tended to gravitate to character race-class combos with the fewest restrictions: human cleric. Human or dwarf fighter. Elven fighter/magic-user. Half-elf bard (we had three!).

Most demi-humans have several strict class/level limitations which limited certain combinations’ long term viability in our campaign. Sure, you can play a half-orc cleric…up to 4th level! You can play a half-elf fighter…up 8th level (IF you have 18/00 strength). For the most part (except for bards), everyone in our group elected to play humans.

With one exception. There is one character class that actually has a greater benefit when combined with a specific demi-human race than with a standard human: the halfling Thief. Halfling thieves have no limit on experience level, take no hit in earned experience, get a ton of bonuses to their thief abilities, and have several racial abilities that compliment nicely with the thief class. We had more halfling thieves traipse through our campaign than any other racial type (with names like Mouse, Shorty, and Feazil). If Jason, whose PC Sneakshadow was the longest running, highest level thief of our Original Campaign, had stuck around till we started playing AD&D (he never made it past B/X), he would probably have converted his character to a halfling thief…Sneakshadow was already pretty short of stature.

I suspect that halfling thieves were prevalent in ALL AD&D campaigns of the first two editions…hell, I doubt there was a more popular career choice for any NPC of the local halfling shire. In fact, I’m guessing that it is the ubiquity of the halfling thief that is directly responsible for Weiss and Hickman’s creation of the kleptomaniac KENDER race of Dragon Lance (“well, all the halflings are going to be grubby little thieves anyway…let’s build it into their culture so as to explain it!”).

Hell, the halfling thief is such a standard of D&D that the archetypal Rogue in 3rd edition is Lidda the halfling…I’ve seen her name in more than a couple adventures, not to mention throughout the core books.

What a crock of shit.

First off, let’s call a spade a spade: a halfling is a hobbit, okay? All recent resemblance to “the Wee Folk” aside, there ain’t nothing else after which Gary and Dave could have modeled them. Baum’s munchkins? I think not. I don’t have a first print copy of Men & Magic, but I DO have a first print copy of Volume 2 of the LBBs, and I can assure you that it includes Balrogs, and that treants used to be simply Ents. Tolkien estate, D&D DID rip you off!

[has anyone else had to explain to a non-gamer what a halfling is? I invariably call it a hobbit…it’s the easiest way to get the point across]

So who is the archetypal hobbit thief that has led so many people away from the original purity of D&D and into the cranky, creaky, clunky realm of AD&D (which of course has led to the even more rules bloated D&D3+ with its dwarven magic-users and half-orc bards).

Um...there is none. Nope no hobbit thieves to be found.

Mother-fucking Bilbo Baggins.
This guy is about as much a thief as Bucky is…less even! Just because Gandalf calls him a "burglar" and sends him along as some “lucky number” does not confer lock picking and trap finding skills to this guy. Fact of the matter is Gandalf was either a benevolent wizard encouraging folks to meet their full potential…or a crazy old ass that just liked to F with people for a few jollies. I could make a case for both.

Goddamn “Burglar” Baggins. This cat is NOT a thief. He’s quiet ‘cause he’s a hobbit, like ALL of his race (as described by Tolkien). If I had tougher soles, I could walk around barefoot and make no noise, too. My beagles do it all the time, and without their jingling collars, they are quite silent.

Goddamn it Bilbo! No way this guy is going to pick a lock, remove a trap, or backstab someone. Yes, he manages to get the drop on some spiders with the aid of a magic ring, but for the most part he’s slinging rocks at their heads, not stabbing them in the flank.

And picking pockets? Yeah, how’d that work out with the trolls, Bilbo, you old son-of-a-gun? Not too well as I remember....

Now, don’t get me wrong folks. I LOVE hobbits, and Bilbo’s book in particular…I’ve read The Hobbit probably half-a-dozen times and seen the film at least as many. I have a whole Blood Bowl team painted up like hobbits (if you think those tubby little guys in WFRP are “halflings,” you is crazy!) and they even managed to wipe out a quality skaven team en route to the final round of a Spike! Magazine trophy tournament (sadly, their starting line-up was eaten by Borak the Despoiler and his Chaos minions in the final).

But hobbits aren’t thieves by trade or by nature…no matter what Gollum says (or what Gandalf may slyly insinuate with a twinkle of mirth…that guy!). Nah…if anything they are fighters, at least in so far as their ability to use weapons and defend their homeland. And halflings (the Gygax/Arneson name for “hobbits”) are the friggin’ same.

IF you choose to stop making the halfling into the UBER-thief class of AD&D, you suddenly lose most of your reason for playing AD&D. In all seriousness! The game systems (B/X and AD&D) are much the same at their most basic level. Spells, equipment, magic items, and monsters not present in the Advanced version can easily be added to B/X version (as I am doing with some of my B/X Companion monsters: Hello Mr. Tarrasque!). The only thing that really needs to be worked out is the whole race-class dichotomy.

Most dwarves would be fighters anyway.

Most elves would be combo magic-user/fighters anyway (sorry Gil Galad!).

And halflings (hobbits)…well, they should be what they are, too. Quiet little fighting men, able to conceal themselves in small places, with deft and dexterous hands when it comes to missile weapons, but unable to lift/wield large weapons.

As far as other AD&D player options that players can’t seem to go without (sheesh!):

Cavaliers, barbarians, and rangers are all fighters.

Druids and paladins are clerics.

An illusionist is a magic-user.

Assassins may be hireling specialists, Normal Men, fighters, or specialized thieves. Bards may be Normal men, magic-users, or thieves. Monks…well they’re a topic for a whole ‘nother post.

Gnomes are easily house-ruled as a class in B/X (it’s been done by many different folks, generally using a combination of halfling and dwarf stats). For half-elves I prefer Tolkien to the BECMI Alfheim gazetteer: the child of a human and elf gets to choose to which race he or she belongs (not both). Half-orcs…would anyone really want to play these guys outside of 3rd edition and later? Well, they’ve been house-ruled for BECMI before, too (basically, they are the exact same as dwarves except they can use large weapons and they don’t get the stone-working skills…they do have a “sense of smell” ability though).

Mmmm…okay, I think I’ve done enough blogging damage for one day. If I have a chance to write later, I will most likely be working on my B/X Companion. Hopefully, I’ve provided some “food for thought.”