Is it February yet? So much for my New Year's resolution to blog more.

Since some folks may be curious, I'll give a very brief rundown. November was a clusterfk on a variety of fronts, save for the always pleasurable Thanksgiving holiday. Fortunately, my family survived and December was much, MUCH better and January continues that trend. Still doing the "stay at home Dad" thing, and it appears this will be continuing for at least a few more months, but I'm good with it. Heck, I'm enjoying it...even getting into the cooking thing a bit...though I'm continuing to scheme ways at monetizing my existence.

[yes, yes...some day I will probably be sticking ads on Ye Old Blog. Fortunately, I'm in a position that such scandal isn't yet necessary]

The fact that both football seasons has ended for Seattle certainly frees up a lot of my free time and energy. Yeah, we got caught up in the Sounders (MLS) last October...more on that later...but the Seahawks are always a timesink of passion. This year, they were a constant source of irritation; the loss to the Cardinals on Christmas Eve was the low-point of the season, and you'd have a hard time convincing me that THAT home loss wasn't the one that cost them a Super Bowl berth. But whatever...go Pats, I guess.

In semi-football news, Games Workshop released a brand new edition of Blood Bowl over the holidays, which I completely missed till...oh, about two weeks ago. Otherwise, I would have thrown it on the Christmas list. As it is, I still picked it up, especially as the boy (six years old, as of last Thursday), has become a fan and player. He'll be painting the new human team who he has imaginatively dubbed The Seattle Seahawks. They've only played one game so far, but it was a barn-burner against the wood elves (coached by Uncle AB...papa was acting as referee for the game). Despite a heartbreaking loss (the elves stormed back from a 3-1 half-time deficit to win 4-3 in overtime), he was impressed enough with the team's performance to make them his permanent side (previously, he'd only used orks).

I'm actually very pleased with the current state of the BB rules. I might post about it later, but my previous gripes (basically, everything since the 3rd edition) have mainly been answered. I do dislike the current version of Mighty Blow (having to pick whether to apply +1 to armor OR injury), but I can live with it. And the new campaign rules (in the new Death Zone Season One supplement) are much improved over more recent iterations (in terms of clarity, efficiency, and balance), but I'll have to play it for a bit to really judge. I really like the current version of the Nurgle team, and I picked up a pack of green stuff in anticipation of doing some serious conversion work over the next month or two. Very excited to pass some infection around the pitch!

Right now, however, I'm trying to get a new team ready for possible play in a local, one-day tournament (cash prizes! yay!). One thing I've learned about mini-painting over the years (at least, regarding myself): it really is best to "strike while the iron's hot." If you get the itch to paint, and you have a few extra bucks (and a few extra hours), there's no better time to just do it. Interest wanes, money and time dry up, and you're left with a stack of unpainted (or unfinished) minis just gathering dust. Some of my best painting work...probably ALL of my "best" painting work...has been done in small periods of time when I seized the moment. So, I'm trying to take advantage at the moment.

Blood Bowl is great for this, by the way, because the team size is so small and easily managed; no team is larger than sixteen figures (plus a couple odd star mercenary types) and often fewer (you only need 11 minis to field a full team). It's probably what makes the game one of my faves (in addition to the obvious draw of football + fantasy). And the pieces in the new edition are really exquisite...it's doubtful that I, a journeyman painter at best, will really be able to do justice to the little guys...but I aim to try!

Those are the orks I'm currently in the process of priming...using a paint-on primer for the first time in decades (as opposed to the usual spray-on stuff) because, I assume, it's easier on the lungs. They're a long-time favorite of Yours Truly...this should make the fourth such team I've painted over the years, despite a profound non-interest in the orks for pretty much any other war game (too many minis required to field a decent horde). However, in honor or my son's newfound interest in the game, I shall be giving them a new color-scheme inspired by his favorite color: pink. 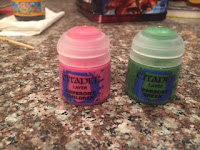 I plan on calling them Bubblegum Dynamite as I fully expect them to blow up the teams they play.
; )

[Diego, BTW, plans on giving his Seahawks a green-and-blue paint job aimed at aping the Sounders soccer team...should be pretty hip, and I'm looking forward to seeing how it turns out]

All right, that's all I've got time for at the moment...I have a meeting at the kid's school this morning regarding registration for next year. Busy-busy-busy...that's my life these days!
Posted by JB at 9:43 AM 4 comments:

Email ThisBlogThis!Share to TwitterShare to FacebookShare to Pinterest
Labels: bb, collecting, diego, ork
Newer Posts Older Posts Home
Subscribe to: Posts (Atom)
MY RPG blog, with an emphasis on Old School Gaming, especially AD&D and B/X Dungeons and Dragons...though I dabble a bit in everything else. Welcome to the Void!