Doesn't Everyone Have A "Robilar?" 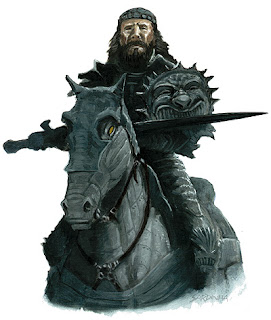 I know that at least in one long-running campaign, I was Robilar.

I’ve been reading up on Gygax and Kuntz today…not too unusual for me, but perhaps that seems strange to some readers. Personally, I enjoy reading accounts of other people’s game-play (what one might call “actual play”) though rather than a blow-by-blow I prefer to hear “war stories.” You know, like “we went here and THIS happened and while that was going on here’s a funny anecdote or two.”

Some people don’t like hearing about someone else’s camping trip or vacation (or, God Knows, their D&D adventure), but this is the kind of fun conversation I like…so long as it doesn’t go with a three hour photo slide-show (a picture may be “worth a thousand words” but a good short story told with the humor of hindsight is worth a thousand pictures).

Anyway…reading interviews or stories or articles about the players of the early days are just as fun (for me) as reading about someone’s exploits in the Tomb of Horrors (and how their character died an agonizing and possibly humorous death). Not only does it give me insight into those “early days of the hobby,” it helps me feel connected to those primogenitors as a fellow role-player…and I like that.

So today I was reading about Gygax and Kuntz and how Gary liked to play 7+ sessions per week “back in the day,” and how Kuntz, perhaps frustrated by other players’ “lack of interest” did a lot of “solo adventuring” – and likewise, how the two would trade-off as Dungeon Master running each other’s favorite character through fiendish adventures.

The end result? Robilar and Mordenkainen had many adventures, amassed a great deal of power and treasure, rose to high levels, and became living legends in their campaign world…a campaign world (Greyhawk) that has been shared with the gaming world for many years now.

Doesn’t everyone’s long-running campaign have a Kuntz/Robilar player in it?

For whatever reason, some of us are more “into” this silly role-playing thing than others. Why do I have so many thoughts and stories on the game even though I stopped playing more than one-off games close to 20 years ago? Because when I was running long-term campaigns I was INTO IT, man.

I read somewhere on the internet (that old thing) how people these days have just too busy of schedules to put time into role-playing. Well, maybe that’s true (I guess it depends on one’s priority…certainly adults with kids and jobs have less time), but I sure had A LOT of time back then. Every day I would devote several hours to the role-playing hobby. Of course that was back before there was Facebook to update, or blogs/news reels to check, or blogs to post, or digital On Demand TV to watch…I think people just piss away their free time a lot these days. I know I do.

Dig: back in the day, I didn’t have all these “distractions.” Oh, I had a TV but I didn’t watch much of it. After school work, sports, Scouts, Church, and family dinners, most of my free time was divided between reading books and playing role-playing games…and I generally only read when no one was available to play. Even if we couldn’t meet face-to-face, we would talk on the phone for HOURS, tying up the land line (no cells in those days). Our parents eventually got “call waiting” – and then we’d do three-way calls! When one of us was out of “local call” range (generally because we were on family vacations somewhere…everyone took a couple on an annual basis) we would correspond by LETTER WRITING.

Talk about oldest school. You know how I blog? Well, that’s how I used to write letters: wordy and ranty and often. I’d fire off three to five page missives a day or every other day…and boy would my hand get cramped from writing. I did have fairly good handwriting, though.

The point is, this is how we gamed. D&D (and other RPGs to a lesser extent) was the King of entertainment. And those of us who were into it, were REALLY into it. And there were some of us…like my co-DM Jocelyn and myself…who were the “impatient types,” like Gygax and Kuntz. Who had to have it 7+ times per week.

That’s what I mean by “I was Robilar.” Maybe I should say I was Mordenkainen since, like Gary, I started as the DM and only got to play after Jocelyn (my Kuntz analogue) started acting as co-DM.

Whatever…either way, our personal characters (which, like Robilar and Mordenkainen, shared the same campaign world) grew to be rich and powerful (mainly through the extra attention rather than extraordinary play) and eventually became the legends of the campaign world.

Not to hurt anyone’s feelings (certainly not those of Mr. Kuntz!), but in hindsight this appears (to me) to be, well, kind of a “DM’s Pet” thing. Though honestly, it’s only really bad when the DM plays favorites with their “diva player” while other players are present. Hopefully, that’s not the case. I know from personal experience that the DM tends to be HARDER on these “star” PCs when other players are at the table, for several reasons:

I don’t know if that’s how things rolled for Gary and Rob…certainly some of the Robilar “war stories” (like being chased over half the world) sounds like the kind of thing I experienced as a Robilar-type badass.

By the way, I’ve seen this kind of thing inside other gaming groups, too (the reason for the title of this post). With my buddies Ben, Mike, and Michael, it seemed obvious that Michael and Ben echoed this dynamic (I always felt somewhat of a “2nd fiddle” when I was in their Palladium games, and Mike may have felt the same). Likewise, when I played Stormbringer with those guys, it was Michael and I that spent more time “bonding,” though this may have simply been due to our shared interest/love in the material.

These days, I haven’t played or run a campaign (of ANY game) long enough to see who rises to the rank of “DM’s Pet” (to use a derogatory term…sorry), but I assume the DM-Diva relationship still shows up now and again in long-term play. I don’t think it’s necessarily a “bad thing” and it can be mitigated somewhat by the DM running solo adventures with other interested players…both I and my friend Jocelyn used to do this, we just didn’t do it AS MUCH with the other players as with each other. And, anyway, shouldn’t players who devote more time and energy to a game be rewarded for it?

Maybe. In the past, I wouldn’t say D&D was a game that rewarded “just showing up at the table” (now…who knows!). It was supposed to reward good play. Playing more often meant an increased risk of dying (more saving throws versus poison to take…)…but still, there’s playing hard and playing soft, and favoring one player over another will generally lead to resentment and rifts in the game group.

I just wanted to point out it wasn’t a unique phenomenon. And in MY old campaign, I was “that guy.” In the past, I always felt my actions were “good for the war stories.” After all, it gave the other players someone to hate and conspire against. Now, well…I hope that I didn’t completely ruin shit for folks. We always seemed to have had a good time, but how would I know…when I cared less about other players’ fun than my own?

Well, whatever (I can’t beat myself up about the past all day)…for me, at least, I can chalk up part of this to my personality. It’s the same thing that drives me prefer (playing) individual sports to team sports…or that makes me forgo networked computer games in favor of solo play…or that makes me beat my own head against a wall for twelve months to put out a book that might have been done in half the time if I’d allowed a few people to collaborate. The astrology tells the tale for me: I’ve got my Mars in Aries in the House of Leo…I’m a guy that wants the freedom to charge ahead, whenever the F he feels like it (and hopefully look good doing it). Having Mars in direct opposition to a certain “U” planet, just means I have the propensity for alienating others in my quest for personal freedom.

Any other “Robilars” out there? What’s YOUR excuse, douche bag?

(and yes, if you are a Lone Wolf Aries or a Big Phat Leo, you may use astrology as your excuse…we forgive you!)
Posted by JB at 12:39 PM