As the party gaped around the immense, rubbery “bubble chamber” in which they stood, a huge form scuttled out of the darkness, moving swiftly on multiple legs that belied its lumbering form: the largest giant crab any of them had ever seen! Towering over them, its giant claws snapped and bashed, knocking Weasleteats ass-over-tea-kettle while scattering the other party members hither and yon. 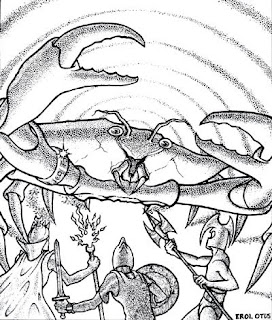 Farnsworth, Gustav, and Borgnine were quick to react, hoping fresh Dungeness would be added to their otherwise dry rations and attacked with flashing blades and chopping axes. Weasle, perhaps a bit too true to his namesake, decided discretion was the better part of valor and cast a veil of invisibility about himself while pulling himself from the floor. Meanwhile, Brian and Kevin wondered what tactics to take and Allster changed the sticks stuffed in his belt to more than a dozen squirming snakes!

The warriors blades missed their mark more than once, bouncing off thick crab armor or being deflect by the thing’s waving arms. Each strike that missed scored the rubbery “flesh” of the chamber, opening gaping wounds that let through streams of scalding water, cooking the party members to varying degrees! General chaos ensued as the party found the chamber begin to collapse like a perforated soufflé.

The following occurred over the next several rounds:

Farnsworth was determined to go toe-to-toe with the giant crab, yelling at the others to look for treasure, while telling the monster he intended to eat it with melted butter.

Gustav, scored the most telling blows on the crab, capturing its attention, and getting the crap beat out of him. Using his warhammer he found the lack of edge was good for NOT puncturing the skin of the chamber, but he eventually dropped this in favor of his magic sword (once he realized the chamber was already collapsing).

Borgnine took a couple strokes at the crab, opening a monstrous gash or two in the wall of the “bubble,” before deciding to retreat to the chamber’s entrance. From there he could shoot the thing in relative safety with his magic-primed crossbow.

Weasleteats cast fly on himself and decided to escape back down the corridor, still invisible. He did stop at the metal doors…but not for long.

Allster commanded his snakes into battle which, being non-poisonous, turned out to be a fairly futile gesture [I probably should have ruled the scalding water “steamed them” to death, but they did little damage to the crab]. The cleric then made his way deeper into the chamber, where he found a large, heavy chest…and yelled for the others to come help him!

Bryan had retreated to the entrance of the chamber, attempting to pepper the crab with arrows (most of these sailed wide, puncturing the skin of the chamber). Upon hearing Allster’s yells of “Treasure! Treasure!” he forgot all about his friends and ran across the room to help scour the chest.

All the while, the chamber continued to collapse. As time wore on, boiling water did damage to the party member, hit points were tracked, and the crab refused to die. Allster decided his Lawful deity would forgive him an act of desperation and cast finger of death at the giant monster…which the creature barely saved. Meanwhile Bryan had opened the chest (it was unlocked) and seeing a gleaming trident atop a number of small bags…WAVE!...immediately ignored the magic weapon in favor of the treasure beneath it.

“What are you doing?! Grab Wave!” yelled Allster.

“YOU grab Wave! I’m scooping all the bagged loot into my bag of holding!” retorted the Halfling.

From the first round, when the first wild strokes opened gashes in the chamber, the party had a total of 5 rounds to escape prior to complete collapse. The five rounds were randomly determined by the roll of a D6; I could have as easily rolled a “1” or “2.” Towards the end of the collapse, the boiling water entering the chamber started doing some real damage to PCs not protected by fire resistance magic…the party knew that complete collapse was imminent and escape imperative.

The party killed the crab at the end of the fourth round following the beginning of the collapse.

Round five: DM asks “What are you all doing.”

Gustav: I’m running like hell, but I’m going to stop to retrieve my warhammer first.

Weasleteats had already flew back to the Kelpies’ chamber when he saw the boiling wall of water coming down the corridor.

Bryan the Halfling: (perhaps knowing he’d never make it, being on the far side of the collapsing chamber) I’ll grab Wave!

DM: Wave speaks in a booming voice: “Ho, Mortal! I am Wave, beloved of Poseidon! If you bow down and worship the Sea God, it is within my power to save you!”

Brian: Um, yeah, Posiedon is good…I’ve always been a big fan. Never have hurt a fish…um, except for some crabs…

Wave: “Ho! Good enough mortal! If you will spread the Good Word of the Sea King, we shall leave this place you and I!”

Gustav: Um…does he have the power to save your friends?

The steel doors…long down the corridor without the chamber…had been designed to close and hold against any such catastrophic collapse, preventing the dungeon from being flooded with the boiling water of the core. I had the player check to see if each dagger held in place (a 5-6 on a D6…the same chance as a person would have forcing a door open), and all three failed.

I then checked each character’s running movement (in feet per round) plus they’re relative placement (based on their final round location) to see how far they could actually “escape” before being overtaken by their watery doom. Weasel, of course, had no problem flying away. Allster, Farnsworth, and Kevin made it as far as the second doors before finding themselves trapped and locked. Borgnine and Gustav (who had stopped to picked up his hammer) didn’t quite make it to the first set; Gustav was cooked alive, while Borgnine’s ring of fire resistance could not prevent the dwarf’s drowning…their bodies floated back and down into the volcano’s still molten core.

And Bryan the Halfling? Wave created a bubble of cool protective air around him, completely shielding him from harm. As the chamber collapsed, he was cast down, down, down with the flood of water, until the water contacted the mountain’s fiery innards, changing to super-heated steam and blasting him up the shaft of the cinder cone. High above the world, he surveyed the countryside from a birds’ eye view, before tumbling and bouncing down the side of the mountain, perfectly protected, and finally coming to rest at the base of White Plume Mountain.