A few days ago, Sir Rob asked me if I'd review I6: Ravenloft, not to critique it so much as to analyze whether or not I thought it truly was the Hickmans who started the "Adventure Path" trend (with I6 and/or Dragonlance), and ALSO how I might go about making the game more "player-centric" while still maintaining its "gothic vibe." In other words, how would I un-couple the thing from its railroad aspects while not killing the mood. Being the gracious (and egomaniacal) type of guy I am, I said 'sure, why not?'
THIS. IS. RAVENLOFT!
But first, allow me to say this: when they look back at their lives, I'm going to guess that the Hickmans (Tracy and Laura) are going to say that the greatest thing they ever did for their careers, was to take a job offer at TSR and move from Utah to Wisconsin. Had they not done that...had they instead taken other gigs locally, gotten help from their parents, continued to raise their kids in the same town they'd grown up...I just can't see them going on to having the success they managed to achieve. Without the backing of TSR (and the built-in fan base)...would they have ever been much more than independent publishers of the occasional D&D module? Would they have even continued to do that?
The fact is, Hickman wasn't a great writer...and I say that as someone who has read the first six Dragonlance novels (multiple times!) and enjoyed the hell out of them. Maybe I'm wrong but I don't think Hickman becomes a famous, bestselling novelist without TSR. Steinbeck he was not.
[sorry, I've had Steinbeck on the brain a lot recently, considering the parallels between The Grapes of Wrath and our current pandemic-enhanced homeless crisis. But I digress]
What he was...what both the Hickmans were...were rather good adventure designers. I have no experience with Rahasia (one of two modules that got the Hickmans hired by TSR), but I've run I3: Pharaoh two or three times, I4: Oasis of the White Palm at least three times, and I5: Lost Tomb of Martek once or twice...both as "one-offs" and as part of on-going campaigns. While I have a notable soft-spot for anything Arabian Nights related, the adventures were quite interesting, filled with ingenious dungeon design, evocative situations, and (yes) whimsy (the floating tomb of Martek was written/published a year before the rather paltry knock-of appears in DL4: Dragons of Desolation). I especially like the combination of ancient Egyptian mythos with Golden Age Islam fairy tale stuff (this is best seen in I4: Oasis of the White Palm)...but skating over a sea of glass with light-powered sky-ships, avoiding sunspots and purple worms...I mean, come on, that shit is cool!
But it's been twenty years since I've read those modules and it's certainly possible I'd see them today in a less favorable light. The clever intertwining of adventure sites (with actual treasure!) is a bit of a "railroad" but the idea of needing to "solve an adventure to escape" (as in I5) has been around long since before the Hickmans came on board at TSR: Moldvay did this with X2: Castle Amber in 1981, and there's a bit of that in 1980's Q1: Queen of the Demonweb Pits as well. Likewise, there are other examples prior to the Hickmans' career of both "backstory" and forced compliance with the adventure (a common gripe with the I3-I5 series): you see the former in modules like N1: Against the Cult of the Reptile God and B3: Palace of the Silver Princess, and the latter in the introduction to the G-series...all adventures that (generally) receive high praise and/or are considered "classics." 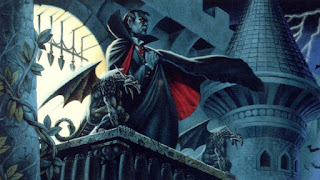