This is a bugbear: 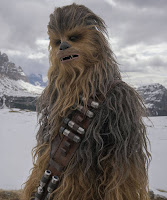 I'm absolutely certain that 100% of my non-robot/spambot readers will recognize the character in this image, even if they haven't made a point of seeing every Star Wars film in the Lucas library.

The original description of the bugbear (from OD&D's Supplement I: Greyhawk) simply states:

These monsters are of the "giant class," being great hairy goblin-giants. Despite their size and shambling gait, they move very quietly, thus increasing their chance to surprise a party by 16 2/3%.

[for the uninitiated, that would mean achieving surprise on a d6 roll of 1-3, rather than the standard 1-2]

Holmes's description in the original basic book changes this description very little, adding only that "they attack without warning whenever they can." Holmes also notes their alignment as chaotic evil, whereas the creature was originally presented (in OD&D) as having the potential for both neutrality and chaos.

The AD&D Monster Manual, as usual, expands the creature's description considerably, with special consideration given to armaments and tribal organization. However, the introduction to the entry is my main interest:

Bugbears live in loose bands, and are typically found in the same areas as are goblins. Unlike their smaller cousins, however, these hairy giant goblins operate equally well in bright daylight or great darkness (as they have infravision to 60'), so they are as likely to choose a habitation above ground as they are to select a subterranean abode.

Just what am I doing here? Well, I'll tell you. Remember this recent post of mine discussing how I've found I can get by without alignment in the game? All well and good and working just fine (still). Here's the thing though: once you remove the idea of "cosmic evil" from the game and are simply left with sentient humanoid species, you've only got a couple easy ways to go with your "fantasy races:" full on conquistador (conquering the "savages" and all of the imperialist tropes and associated awfulness), OR  create some sort of fantasy Star Trek-like utopia with all the species intermingling and elbow-rubbing one expect to find in a Roddenberry space station.

I don't like either of those options. And since my fantasy world has some established concept parameters (for example, humans dominate, cultures tend not to mingle unless sharing a species, no concrete alignments), I've got to go a different, harder route and make things work. I've got to basically make each species its own damn alien thing, that keeps the creature from adapting to humanity's ways (setting up shops in the town) while not making it a cardboard villain to be cut down.

And there are a LOT of humanoids in the game. Gnolls are basically Warhammer beastmen (uplifted, mutant animals), and orcs are simple mutants ("half-orcs" being first generation spawn of normal parents). But goblinoids...there are a LOT of goblinoids...especially if you start including the aquatic versions and variants found in later "monster manuals."

TWO...two types of goblins are about all I can stand (which is why, when running UK2: The Sentinel I changed the blue-skinned xvarts into blue-skinned goblins). "Goblin," I've decided is just a human word for any sentient, non-allied humanoid species. Big goblins, little goblins, hairy goblins, and militaristic, jackbooted goblins (could D&D hobgoblins take their name from the hobnails they sport? Sure, why not).

But I'm only having two species of goblin in the game, and their differences are largely that of culture and priority. Hobgoblins are to goblins as Spartans were to ancient Macedonians, and if you think I'm paying them a compliment, then you should probably read Bret Devereaux's blog. Spartans were pretty awful, in just about every way possible, and hobgoblins (in my campaign) are the same.

SO...bugbears. They are most assuredly not goblins. They're not big goblins, they're not hairy goblins, they are their own darn species. They are wookies. They can live in caves, but they prefer arboreal surroundings. They are diurnal, unlike goblins...their "infravision" is a way to model their keen sense of smell. Their armor class and high hit points represents their innate toughness; they wear little in the way of armor (hence, their increased stealth ability...which is still not as good as an unarmored elf, seeing as how freaking big they are). They are, however, tool users, and construct their own homes and weapons. They hire themselves out as mercenaries, and covet treasure both as a means of exchange with other races, and for ostentatious displays of wealth.

They have a love for family and a cultural tradition of honor that includes life debts, ritual combat, and mating for life. Despite their mercenary ways, they hold themselves aloof from other species and tend to look down on them (for failing to share their cultural values) and they often bully smaller species. It doesn't help that their ability to communicate is hindered by limited vocalization, but they comprehend other languages -- including the common tongue -- as well as any human of equal intelligence, and other races can learn their language with a bit of patience. Still, this lack of "speech" and their intimidating stature has led some to see them as little more than primitive savages.

They are strong workers and are prized as slaves by unscrupulous cultures. This has done nothing to improve their relationship with other races.

"Bugbear" is not a name they call themselves. In fact, they find the term derogatory and insulting, and have been known to pull the arms off those brazen enough to use it as a form of address.

My players (i.e. my children) have not yet encountered bugbears...not in B/X or OD&D or (as of yet) AD&D. That will soon be changing. They have created new 1st level characters, ostensibly to give their other PCs "a rest" after the saga that was UK2 and UK3. This time, the plan is for them to once again journey to The Keep on the Borderlands. Yes, yes...cue the groans. I'm trying something a little different with it this time around, and I'm not just talking about using it in an AD&D game.

I'll tell you all about it, one of these days; just not right now (sorry).

My plan is to be pretty busy over the next couple days. Hope everyone has a happy Christmas...as best we all can. Best wishes!

Email ThisBlogThis!Share to TwitterShare to FacebookShare to Pinterest
Labels: b2, ideas, monster, sw